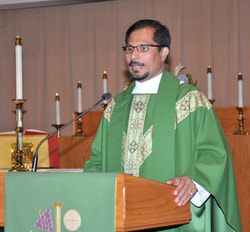 Roy Varghese was born and raised Roman Catholic in India, the youngest of five children. While branded as disabled by polio at an early age, but physical therapy and natural medicines helped him thrive.

Social injustice and economic challenges prevailed in India during his schooling, which led Varghese to the communist party for a time, but an Anglican clergyman developed a friendship with him and was instrumental in restructuring his life and directing him to Christian ministry.

Varghese met his wife Princess while attending Union Biblican Seminary in Pune India. Although raised in different cultures, they both realized a common life in Christ and have been married for more than two decades. With their sons, Joshua and Samuel, the Vargheses are engaged in a church planting ministry among Indian community in the Greater Houston area.

Varghese holds a bachelor’s degree in economics and a master’s in theology. He was ordained in 1995 in the Church of South India and served as the bishop’s chaplain for two years before becoming a prison chaplain in Mumbai. He spent five years visiting the incarcerated in 327 prisons. During that time, his wife worked with women in prison. The Vargheses also worked in rehabilitation ministry as house parents for released prisoners and juvenile home inmates.

After joining the Church of North India, Mumbai Diocese, Varghesse served in three parishes as the family welcomed two sons. They were transferred in 2006 to a Church of South India parish in Houston.

Varghese has also served as chaplain at Memorial Hermann Hospital and at MD Anderson Cancer Center as a patient services coordinator until accepting a call from the Diocese of Texas to be a church planter among the local Indian community.

Princess continues to work at MD Anderson as a patient access specialist and supports her husband in ministry. Both recognize the need support Indian Christians who are removed from their original cultural context and sometimes experience isolation and loneliness in their spiritual journey. Parenting a new generation of Indian Christians in this country, Princess and Roy identify the need, with other parents in the community, for reliable, consistent and organized church leadership that promises to form a community within the Episcopal Diocese of Texas.